Any time you want an object to be able to rotate relative to another one, consider the humble Bolt connector. Whether you’re putting wheels on your barrow or hinges on a door, the Bolt is ready and waiting.

Like all connectors, you’ll need a parent object and a child object that will turn round relative to the pivot on the parent. The pivot point is the critical part of the connector – all rotation will be centred on this point, and it also specifies the direction in which rotation takes place (rotation is restricted to a single axis, unlike with the Ball Joint connector)

As with all connectors, you use it by first connecting it to the parent object, then to the child. A third, pink gizmo, the “pivot gizmo” will automatically appear between the two and can then be dragged into position – all rotation will be centred at the pivot and you can rotate the pivot gizmo to whatever angle you need.

If you want to limit the range of rotation, as with a door hinge, you can tweak the connector accordingly, at which point additional gizmos will appear, as shown here, to indicate the maximum angle. You can grab and adjust these as required. In appearance, the Bolt is almost indistinguishable from the Motor Bolt – though the latter does show a faint line spinning about the pivot to indicate the speed and direction of its motion. 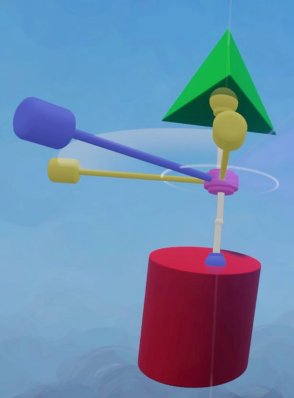 The Bolt is meant for objects that will rotate when interacted with – whether by the player, or the bumps and gravitational forces of Dreams physics. If you want a connector that can turn an object or spin it to a specific position according to logic, you should switch to the Motor Bolt.

Unless you’re actually mounting a wheel on an axle, it’s usually helpful to think of bolts as being like hinges. They allow rotation in one plane, so in the example of the door it doesn’t matter how high up or low down on the door frame the pivot gizmo is placed (you could put it 100 metres above the door!), the orientation of the pivot gizmo itself is key.

However don’t get tricked into thinking of them too much as hinges – in Dreams, your doors, gates, treasure chest lids and so on only need one bolt, even if you’d have two or more in real life. Dreams will ignore any additional bolts! Obviously, you can sculpt something that looks like it has twelve hinges if you like but only one connector should be used.